“Sands of Time”, written by award-winning journalist and author Lindsay Sutton, is on the British Guild of Travel Writers’ shortlist of three for “Travel Book of the Year”.

Published by Great Northern Books, the book was judged jointly by a travel book from Great Britain, America and Australia who selected the three finalists from a large entry of narrative travel books.

The final winner will be announced at a star-studded awards night at the five-star Savoy Hotel in London’s West End next March (2021), which will be attended by representatives from Cumbria, Lancashire and the North West. 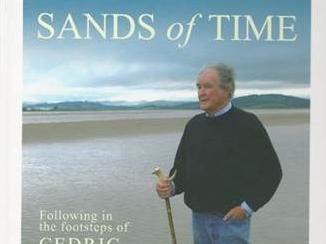 Sands of Time was shortlisted for a top award.

“Sands of Time,” released prior to the Covid-19 pandemic crisis and lockdown, stopped this year’s Cross Bay charity walks and uses the prism of Cedric to show Morecambe Bay and its surrounding communities keen observations and thoughts. He tells how he sees it with characteristic openness. His views are fearless, but they also exemplify his predilection, which is sprinkled with his often evil sense of humor.

Sands of Time ‘addresses the burning problems of today:

* How climate change is dramatically affecting the bay.

* How the channels have changed since the Swinging Sixties.

* The impact on wildlife in and out of the water.

* Ecological and pollution threats to the bay and its coastline.

* Technology and its implications, including future potential developments.

* Social changes in the communities around the bay, including Grange-over-Sands; Arnside; Silverdale, including RSPB Leighton Moss; and Morecambe, including the city’s repositioning in recent years and potentially transformative plans for the Eden Project North on the coast overlooking the bay.

The author is a longtime friend of Cedric and a volunteer on the seasonal Cross Bay walks between late April and late August. A journalist and broadcaster by profession, he has received three top awards for his articles, including American Travel Writer of the Year from the US Travel Association.

Commenting on the Sands of Time shortlist, Mr Sutton said, “We believe that through the eyes of Cedric, the judges saw that the book has a real sense of place, time and experience. After all, he was the Queen’s leader for 55 years before being handed over to the newly appointed guide Michael Wilson, a fisherman from Flookburgh, on the Cumbrian side of the bay.

“The judges appear to have been intrigued by the fact that each year up to 10,000 charity and recreational hikers are safely guided across the vast sand and tidal channels that protrude into the 20 square miles of Morecambe Bay.

“Those of us who help with the walks between Arnside and Kent’s Bank near Grange over Sands are intrigued by the bay and we hope the book will convey that to the judges. It faces stiff competition, but it does is an honor to do so. ” the last three. It’s another feather in the cap for Cedric, the volunteer team of Cross-Bay Walk Assistants, and for charity walk organizers who raise thousands of pounds for those in need.

“Cedric started out on the sands as a ‘fisherman on foot’ when he was only 14 and although he has now taken on an advisory and support role as ‘ambassador of the sand’, he is still going strong at the age of 86. He already has an MBE received, and now this. There is no one who deserves more credit than ‘Ced’.

* The other two finalists are “Wayfaring Stranger: A Musical Journey to the American South” by Emma John and “Scotland Beyond the Bagpipes” by Helen Ochyra.

‘Sands of Time’ is published by Great Northern Books – www.gnbooks.co.uk. It is now available as a hardcover with color images and illustrations for € 9.99.