Well being Issues: Is it Secure to Fly for the Holidays?

Health Matters is a bi-weekly opinion column. The views expressed are those of the author only.

The holiday season is approaching and millions of people are weighing the risk of air travel instead of staying at home. The decision is reinforced by the fact that many have not seen a family in almost a year and long journeys are simply not an option.

While the thought of being locked up in close quarters with strangers for hours is daunting, recent studies have shown that flying may not be as dangerous to the spread of COVID-19 as previously thought, and that cabin air is actually cleaner than that Air in hospitals.

This idea that flying can be safer than the hospital or the supermarket is an idea that airlines praise and fervently announce to all who are willing to listen. The aviation industry has been hardest hit by COVID, with travel dropping dramatically compared to 2019.

For Reagan National and Dulles International, domestic commercial passenger activity declined nearly 80% in August compared to August 2019. The airliner safety message seems to be resonating, as recent data from the Metropolitan Washington Airports Authority shows that domestic passenger numbers have more than tripled in Reagan and more than doubled in Dulles, having bottomed out in April. 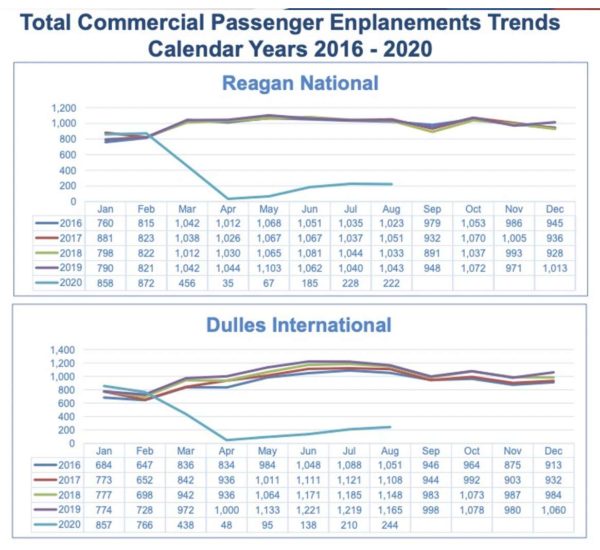 Airlines have gone to great lengths to study the safety of aircraft, and perhaps the most compelling United Airlines-sponsored study has just been published, if not peer-reviewed. Using human-like mannequins and high-tech particle counters near simulated sick passengers, the researchers concluded that the risk of aerosol virus dispersion is reduced by 99.7% due to high air exchange rates, HEPA-filtered recirculation, and downward ventilation.

High air exchange rates mean that the entire volume of cabin air is exchanged every three minutes, with 75% coming from outside the aircraft and 25% being circulated after passing through the HEPA filters. While the ventilation system is running, air flows from the ceiling to the floor, reducing the risk of horizontal transmission. In other words, the risk of transmission is highest when the infected passenger is in the same row and much lower in the rows in front of and behind him.

All mannequins and nanometrics in the world can tell us that flying is safe, but do people actually get sick? Recent studies by the International Air Transport Association reveal 44 COVID-related cases related to air travel of 1.2 billion passengers who have traveled since early 2020.

The small numbers confirm the results published last month by the Journal of Travel Medicine, which examined all peer-reviewed publications of flights with possible broadcast. They concluded that “the lack of a large number of confirmed and published SARS-CoV-2 transmissions in flight is encouraging, but not definitive evidence that airmen are safe.” On October 27, a study by the TH Chan School of Public Health at Harvard confirmed that with masks and adequate cabin ventilation, there was “a very low risk of transmitting SARS-COV-2 disease on airplanes.”

Despite these positive studies on flight safety, not all have shone. One study looked at two passengers and two flight attendants who flew from Boston to Hong Kong with the same strain of COVID 15 hours later, suggesting virus transmission during air travel.

Another study looked at a flight from London to Hanoi where 16 passengers, many in business class, had COVID, indicating proximity as the main transmission factor. Both studies were published in the journal Emerging Infectious Disease and both in March, before masks were mandatory. More recently, a report was published in which, despite precautionary measures and low numbers of flights, more than 100 air marshals have been infected since the beginning of COVID.

Now that I’ve put all the data together, I’m assuming air travel is risky, but less than I first thought. Masks, high air flow, HEPA filters, downward ventilation, staggered boarding and disinfecting between flights are the most effective safety precautions that have already been taken. Yes, most of these large studies are aviation industry funded and are therefore prone to bias, but the retrospective studies that report sick passengers are not airline funded.

Being on the plane can actually be safer than any of the events leading to boarding such as check-in lines, bathrooms, security clearance, taxi, train, etc. I agree with the CDC that it is safest to stay home, But I’m also pragmatic enough to know that people will fly. If you decide to fly and are asymptomatic with no recent exposure to COVID, there are several things you can do to make air travel safer:

This is by no means an exhaustive list of studies, many more are out there and appear weekly, but I think these are the most prominent examples.

What do you think? Do you feel safe to fly If not, when would you be comfortable flying? Do you have any other safety tips about flying?

Dr. George C. Hwang, his patient as Dr. Chaucer is a practicing anesthesiologist who also helps run Mind Peace Clinics in Arlington. He has written for several magazines, textbooks, and medical news outlets, and has lived in Arlington for 15 years.

Is it Protected to Travel to Mexico? Hear from our Consultants!

The Most Complete Guide to Jewish Oscar Nominees: 2021

The Disordered Cosmos: A Journey into Dark Matter, Spacetime, and Dreams Deferred |…